Listen to “The Collected Works of Jackson Barwis” at Archive.org here.

Start With The Most Fundamental Work, "Dialogues Concerning Innate Principles," and then proceed to "Three Dialogues On Liberty" and "A Fourth Dialogue on Liberty."

Listen to a text-to-speech version of "Dialogues on Innate Principles" here.

A Fourth Dialogue Concerning Liberty, from 1793.

This website contains these books in transcribed form, otherwise unedited.

The reason this website was developed was to preserve these works, especially Barwis' "Dialogues Concerning Innate Principles" as potentially relevant to Epicurus' views of anticipations and their relationships to feelings. Barwis suggests a perspective in which Nature implants "principles of operation" which ultimately lead to the formation of ideas in particular areas of life, but that Nature does not implant specific ideas at birth. The "Dialogues Concerning Innate Principles" is aimed at refuting John Locke's views on that subject as expressed in "Essays Concerning Human Understanding." This is of importance to such issues as Aristotle's position concerning the "Blank Slate" and John Locke's development of a form of empiricism.

An Essay Concerning Human Understanding is a work by John Locke concerning the foundation of human knowledge and understanding. It first appeared in 1689 (although dated 1690) with the printed title An Essay Concerning Human Understanding. He describes the mind at birth as a blank slate (tabula rasa, although he did not use those actual words) filled later through experience. The essay was one of the principal sources of empiricism in modern philosophy, and influenced many enlightenment philosophers, such as David Hume and George Berkeley.

Book I of the Essay is Locke's attempt to refute the rationalist notion of innate ideas. Book II sets out Locke's theory of ideas, including his distinction between passively acquired simple ideas—such as "red," "sweet," "round"—and actively built complex ideas, such as numbers, causes and effects, abstract ideas, ideas of substances, identity, and diversity. Locke also distinguishes between the truly existing primary qualities of bodies, like shape, motion and the arrangement of minute particles, and the secondary qualities that are "powers to produce various sensations in us"[1] such as "red" and "sweet." These secondary qualities, Locke claims, are dependent on the primary qualities. He also offers a theory of personal identity, offering a largely psychological criterion. Book III is concerned with language, and Book IV with knowledge, including intuition, mathematics, moral philosophy, natural philosophy ("science"), faith, and opinion.

Please report any typos or suggestions to the webmaster.

We have no pictures of Jackson Barwis to add to the website. If you know of one, please contact us. In the meantime, thanks to Deborah K. for the following photo of Jackson Barwis' gravestone: 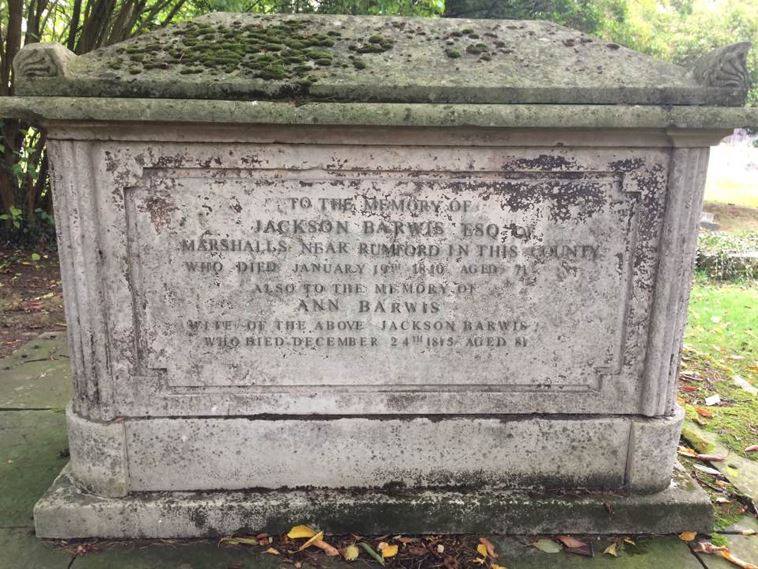 This website is brought to you by NewEpicurean.com and EpicureanFriends.com. If you have questions about this material, or wish to discuss it, visit us at the Epicureanfriends.com forum.